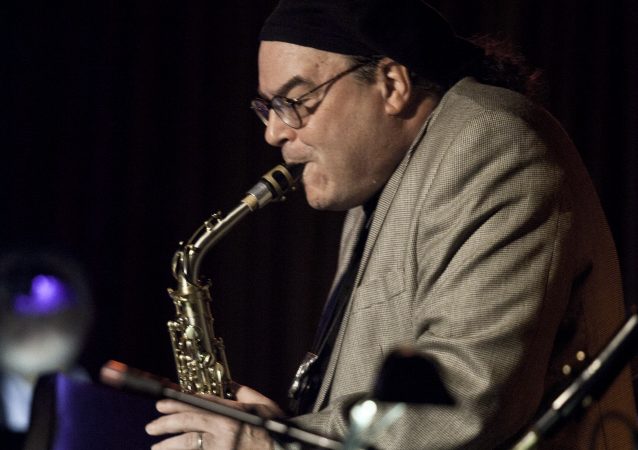 Mike has performed and recorded with over a hundred jazz greats, including Nat Adderley, Clark Terry, Art Farmer, Tony Bennett, Jimmy Heath, Natalie Cole, Linda Ronstadt, Diane Schuur, Gloria Morgan, Kurt Elling, Nancy Wilson, and Frank Sinatra. His distinctive alto sound is featured on recordings as diverse as Peter Brown’s ‘70’s disco hit Do Ya Wanna Get Funky with Me, and Harry Connick, Jr.’s Come By Me, and everything in between.After stints on the Maynard Ferguson and Buddy Rich bands, Mike held the lead alto chair in Frank Sinatra’s core band. His years with Sinatra included television performances, recordings, and the Diamond Jubilee and Come Swing With Me tours, with performances in Japan, Australia, the U.S. and Europe—including a gala in Monte Carlo for the Princess Grace Foundation. It was during these hard-traveling years that Mike released his third and fourth recording for Delmark Records, The Traveler, and Sinatra Songbook, with liner remarks from Ol’ Blue Eyes himself. And Mike has continued in the Sinatra tradition. He is the leader and orchestrator of the Mike Smith Octet, and backs Frank Sinatra Jr. in venues including the Blue Note Jazz Clubs in New York and Japan, Ronnie Scott’s in London, and jazz festivals and showrooms around the world.Mike is a recipient of the Cannonball Adderley Award for Outstanding Alto Saxophonist in Jazz, and a winner of a National Endowment for the Arts award. Mike has performed as a guest soloist and lecturer at the Eastman School of Music, the University of North Texas, the Berklee School of Music, Pepperdine University, the University of Miami, and University of Colorado, Boulder, etc., and with the Navy and Air Force bands in Washington, D.C.From 1989 thru 2008 Mike was saxophone artist and product specialist for the prestigious Keilwerth saxophone. As product specialist Mike oversaw quality control, product development, instrument set-up, and packaging. As saxophone artist, he gave clinics and performed concerts world-wide for the company. He was also the lead designer for the American made Silver Eagle Saxophone, a limited edition instrument manufactured by Verne Q, Powell.In 2011, Mike celebrated 30 years as a headliner at Andy’s Jazz Club in Chicago, one of the city’s premier jazz hot-spots. He is professor of saxophone at Roosevelt University/Chicago College of Performing Arts, and active in the recording industry.You can find out more about Mike and his performance schedule, and buy his music at: https://mikesmithquartet.bandcamp.com, http://mikesmithsaxophone.com andhttps://www.facebook.com/pages/Mike-Smith-Saxophone/558762384142507