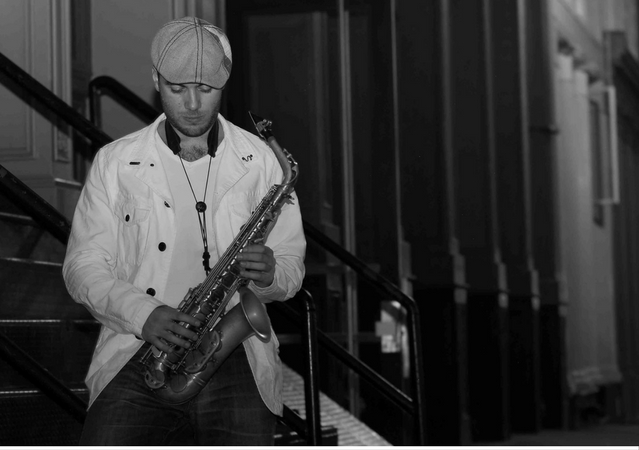 Alex Terrier was born in Paris, France, in 1980. He didn’t grow up in a musical environment, but “the day I sat down to the piano was the first step to a life long journey into the world of music” Alex says. Studying classical piano for a few years, it was a shock when Alex Terrier, around age 12, heard Duke Ellington and the sound of saxophonist Johnny Hodges. That was the second step.

From that day on, Alex Terrier has been dedicating his life to Jazz: “I used to get up in the morning and play the piano half asleep, really first thing in the morning before breakfast. I would listen to music all the time, read, study… that’s all I did when I was a kid”. His first influences were Duke Ellington, Memphis Slim, Fats Domino, and Sydney Bechet, as these were the few LPs he found in his father’s home office.

Alex Terrier received a Brevet de Technicien des Métiers de la Musique in Sèvres (it is hard to translate, but that could be Music Technologic Diploma) in 1999. He received a Médaille d’Or at the Ecole Nationale de Musique d’Evry before going to Berklee College of Music in 2004. He graduated from Berklee in 2007 with a Dual Degree in Performance and Jazz Composition.

He has been since then an active member of the New York scene and has become the first French musician to be part of the legendary Mingus Big Band. He is an indie artist and has become what you could call a multiple threat: band leader, composer, arranger, teacher etc… Alex Terrier’s latest album with pianist Kenny Barron is scheduled to be released in the Fall 2014.

A born leader, he manages his own bands both in North America with the Alex Terrier New York Quartet and Europe with the Alex Terrier European Quintet. He is also increasingly present in South America. “My goal is simple: try to create some beauty and share it. The magical couple hours I share with people during a concert help me keeping on. If I can help even just a few persons to feel better with my music, my life won’t be totally useless”.

Alex Terrier has been interested in composition since an early age, studying both classical and jazz masters: “When I was a kid I would do everything I could to study and understand how it was possible to write music. How could I write melodies like Bach, Debussy, Mozart? How could I orchestrate like Ravel? This is an impossible task to me. I just try my best and hope that someone will be moved by my music”. His two albums feature his compositions. “Stop Requested” was recorded while he was still studying at Berklee and legendary George Garzone supports his then student on 6 tracks. Joe Lovano talks about Alex Terrier as “a very gifted and expressive saxophonist […] with a very strong developing conception as a composer and a soloist”, and “Roundtrip”, recorded in NYC in 2009, illustrates this quote perfectly.

Big band music has also been a huge part in Alex Terrier’s love affair with jazz. He spent countless hours listening to and studying Duke Ellington, Count Basie, Fletcher Henderson etc… and modern ones such as Kenny Wheeler, Maria Schneider etc… Equally fascinated by European composers, Alex Terrier can write for jazz orchestra complex and intricated serial music for big band (“L’Heautontimoroumenos”), swing (“Like Someone In Love”, “There Will Never Be Another You”) or modern jazz (“Scrupules”).

If you would like to discuss with Alex Terrier about some arranging work, contact him via the contact form here. Alex Terrier also offers transcription and copyist services.

As a teacher, Alex Terrier has been appreciated both by private students and in a class environment. The most commun comment is how passionate he is to share his knowledge and genuinely interested in students’ progress. “I remember going to some classes or clinics when I was a kid and being so disapointed. You know, getting out of the class without knowing anything new or nothing to motivate me. Today that’s the worst thing that could happen to me, someone telling me he/she didn’t get anything from my class. Someone trusts me to learn something so I try my very best to share my knowledge in a relax and unintimidating way, but at the same time one has to understand that a serious commitment is necessary“.

If interested in discussing with Alex Terrier about his teaching availability (one on one or group class, improvisation for all instruments, composition, arrangement, band mentoring etc…), you can contact him via the contact form here.

Alex Terrier is also having fun producing music for pictures. “I prefer music made by humans, no question about it. But I have to say it’s a lot of fun to produce music with computers and the tools we have today are truly amazing. I like the challenge to write music specifically for a motion picture, it’s a total different conception. It can be very inspiring”.

In addition, Alex Terrier’s passion for music has pushed him to learn also about the technologic part of his art and has become very knowledgable with saxophones and mouthpieces. In 2011 Alex Terrier teamed up with Fred Lebayle (Lebayle Mouthpieces) and together they designed a new mouthpiece model, the AT chamber.