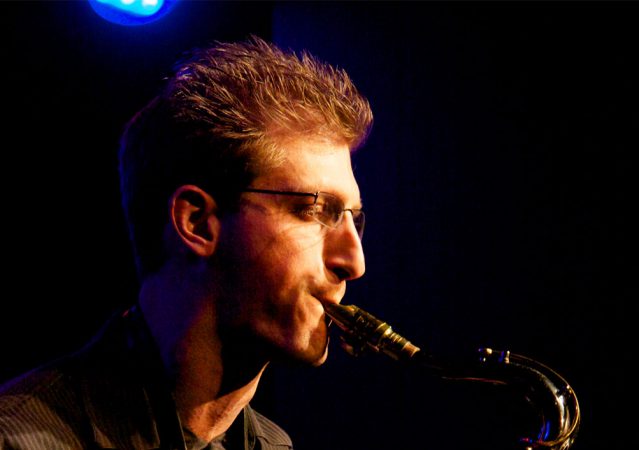 Matt Marantz is a NYC-based saxophonist and composer. A native of Texas, Matt grew up in a musical family. His early studies were completed at Booker T. Washington High School for the Performing and Visual Arts in Dallas, and after graduating in 2004 he moved to New York City to study at the Manhattan School of Music with the likes of teachers such as Garry Dial, Bob Mintzer, John Riley, and Steve Wilson. He now holds a bachelor’s degree in jazz performance on saxophone from that institution.During his career, Marantz has played with jazz notables such as Herbie Hancock, Dave Brubeck, Christian McBride, Roy Hargrove, Branford Marsalis, Jeff “Tain” Watts, Ingrid Jensen, Steve Cardenas, and Terence Blanchard. He has performed with various groups at musical venues such as the Kennedy Center in Washington, D.C., The Monterey Jazz Festival, The Umbria Winter Jazz Festival, and the TIM Jazz Festival in Brazil. Marantz has also performed at New York City music venues such as Dizzy’s Club Coca-Cola, Merkin Hall, 55bar, and the Jazz Standard. Recently, Matt was selected to be a member of the 2009-2011 Thelonious Monk Institute of Jazz 6-piece college ensemble that is part of a 2-year artist diploma program in New Orleans. He studied there under artistic director Terence Blanchard, and in May of 2010 the Monk Ensemble traveled to China alongside jazz greats Herbie Hancock and DeeDee Bridgewater to perform at the Forbidden City Concert Hall in Beijing and the World Expo in Shanghai. In the fall of 2011 Marantz began a grad-assistantship at William Paterson University in New Jersey and is now residing in the NYC metro area where he performs regularly with Jonathan Batiste’s working band and various other musical groups.In March of 2010, Marantz’s first CD recording as a leader, “Offering”, was released independently. On the CD, Marantz leads a stellar group of musicians through a set of 11 original compositions. “Offering is a splendid debut, with a tone of inner reflections articulated through sophistication and melody.” – (All About Jazz)